Tobacco tins carry all kinds of terms like plug-cut, cube-cut, cross-cut, roll-cut, crimp-cut, rubbed, and more. What do all of these terms mean and why would you advertise them?

Prior to World War I, almost all tobacco consumed in America came as precut leaf that could be chewed or smoked by pipe or self-rolled cigarettes, while rolled cigars were popular in their own right and so each person had a preferred method or type of tobacco because things were not as standardized as you would see in a store today.

Below are some types of cut tobacco and an example or two:

Crimp Tobacco – Crimped tobacco is used primarily in pipe smoking and is made by lightly pressing short cut varieties of tobacco. The Prince Albert tin below is very common and usually sells for around $5, the Taxi tin is one of the rarest tins around and easily sells for over $1000! 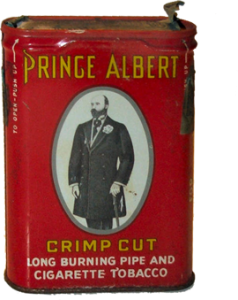 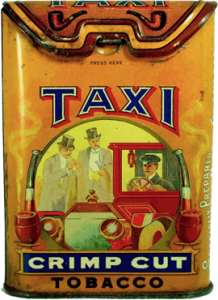 Cube Tobacco – This is tobacco leaf that has been cut into small, relatively uniform squares that are easily put into a pipe or cigarette for smoking. 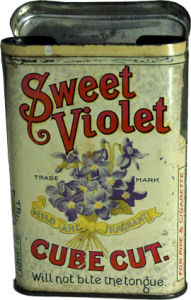 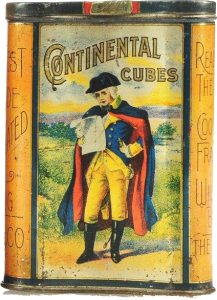 Flake Tobacco – Flake cut tobacco is made by pressing tobacco leaves into long flat blocks and then slicing them. Flake usually is used to blend different tobaccos together and allow their flavors and moisture to merge to create a more uniform mixture. 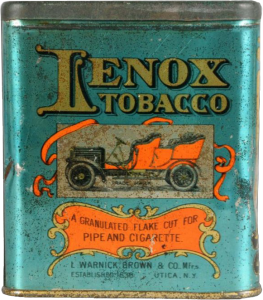 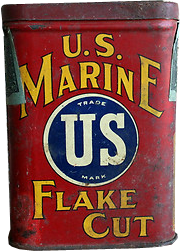 (Both Flake and Plug tobacco need to be “rubbed” before smoking because you cannot smoke them as solid blocks, you have to break the tobacco back up into smaller pieces. This process can take some practice before the best results are achieved so some companies offered “ready-rubbed” tobacco that was already broken up and ready to smoke. )

Plug Tobacco ( aka Navy Plug ) – Is made by taking tobacco and flavorings or additives and pressing them into a long roll which is then sliced into thin rounds. 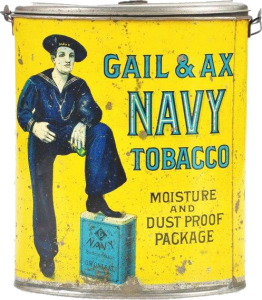 Plug is probably the most commonly seen type of tobacco on tobacco tins, however you can’t smoke the rounds directly and there are many sub-types of plug based on how the rounds are cut or shredded. 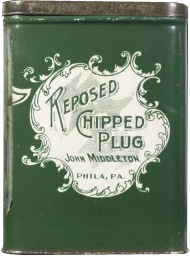 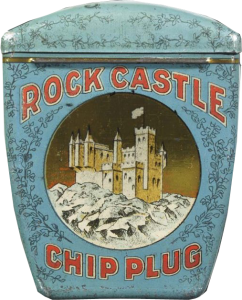 Crushed Plug – The plug is crushed, similar to rubbing by hand 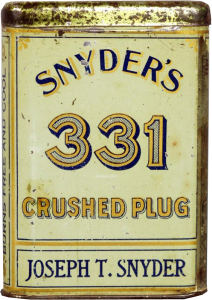 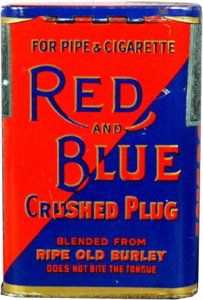 Granulated Plug  – The plug is ground into a small enough grain to allow smoking without the buyer of the tobacco having to rub out the plug themselves. 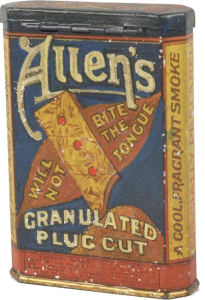 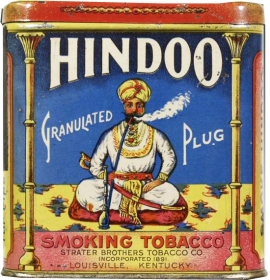 These are not all the types of tobacco you might see mentioned on tins but I hope it gives you a good enough idea what the terms are describing to understand things even that might not have been explained here. As cigarettes grew to an ever larger market share the type of tobacco used in the mixture and “toasting” and other curing methods would become more important advertising features and you can see this in the development of Lucky Strike’s branding in the previous post, especially if you go look at some of the antique magazine ads.

Thanks for looking, see you again soon.